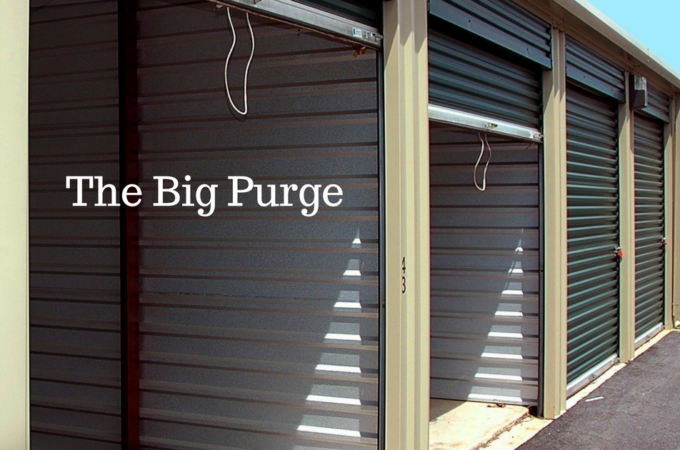 And [Jesus] said to them, “Take care! Be on your guard against all kinds of greed; for one’s life does not consist in the abundance of possessions. (Luke 12:15)

The beginning of this weekend was marked by beautiful weather– which only partly made up for the intense winter we’ve had here in Pennsylvania this season. So how did my husband Will and I celebrate this amazing weather…?

…We minimized. Specifically, we started minimizing the area we haven’t been able to touch all winter due to the crazy weather– our storage unit. 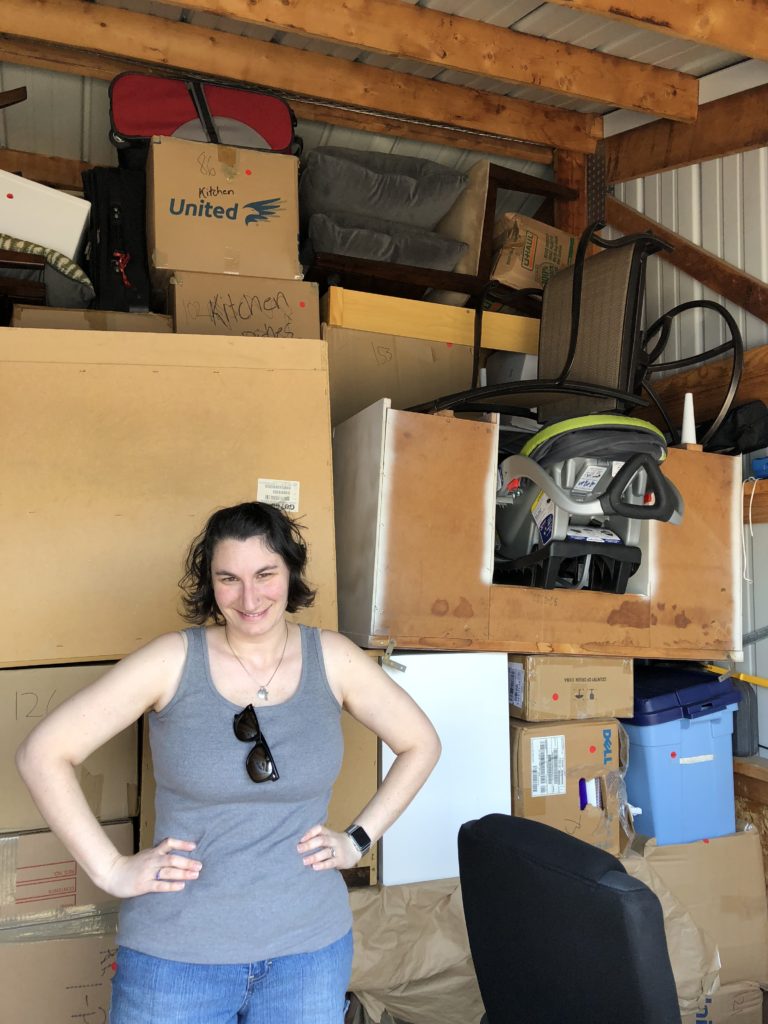 Since moving from Buffalo, this storage unit has been weighing on our minds. Even before we discovered minimalism and connected it to our Christian faith, we knew that moving from a 3,000 square-foot house to a ~1,200 square-foot apartment meant that most of our stuff would have to be stored elsewhere. And then once we made the decision to adopt a Christian Minimalist lifestyle, it was obvious that minimizing what was in there was imminent.

AND since we are moving to Philadelphia in less than 2 months– into a house that is only slightly bigger than our current apartment– we had even more urgency to get to the storage unit and minimize the heck out of it.

Will had gotten a head-start the week before. He grabbed some baby stuff that was near the front and loaded it into the car and drove it to the local Rescue Mission to donate. That was helpful, but we also knew that was just the tip of the iceberg. 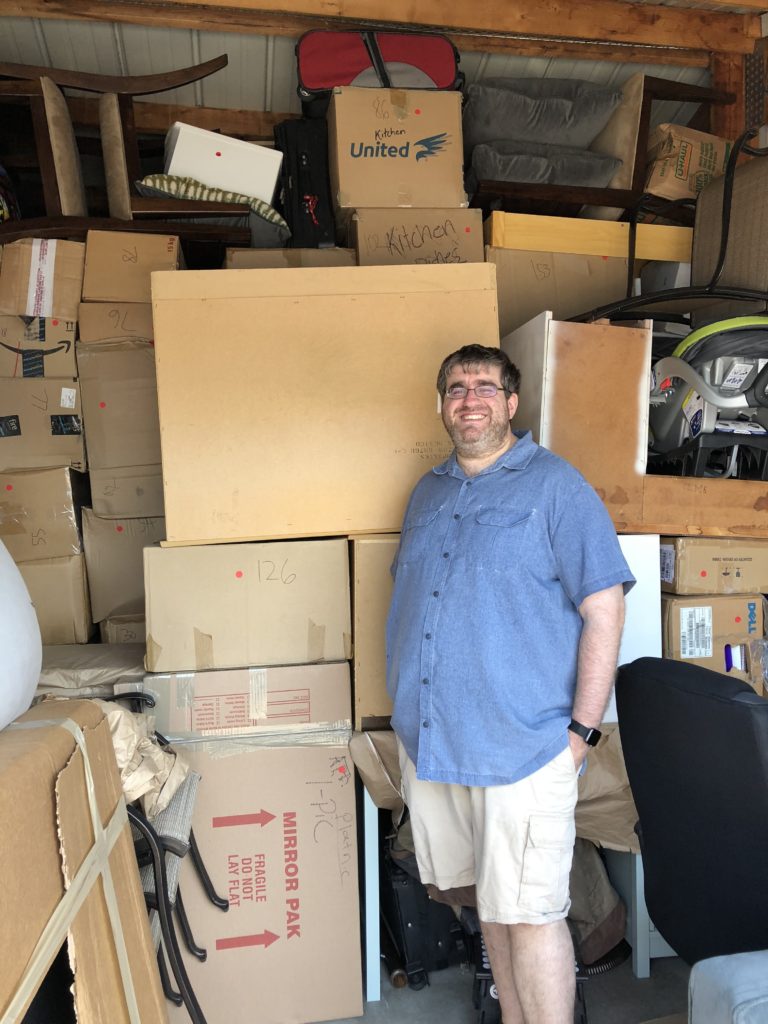 We were realistic enough to know that a floor-to-ceiling-stuffed storage unit would not be completely minimized in one day, but we wanted to get as much done as we possible. So today, we rented a truck and hired a seminarian from the seminary I work at (to help us move things in the storage unit and help load said truck).

Now this all sounds very simple and straight forward– but even setting aside the time and effort it took to just sort through stuff (mostly furniture and baby stuff) and get it loaded onto the truck, it was emotionally difficult to decide what to keep and what to let go. The bedroom set that my Mom used since she was five and that I used ever since needed to go, and it felt like my soul was sobbing as we loaded it onto the truck, even though letting it go was the right thing to do.

And don’t even get me started on the baby stuff. We knew that so many people would benefit from our donations, that people need baby furniture and diapers and everything else– but watching that stuff go was like re-living the grief of losing our son. Our hopes and dreams for our family seemed to be loaded into that truck as we minimized the baby stuff.

Minimizing is one thing, but most people don’t realize that minimizing and decluttering can be super emotional. Even though we logically know that inanimate objects don’t actually hold memories or people, getting rid of stuff that has meaning to you can be really hard, even when you know that getting rid of it is the right move.

But working through the emotions is so worth it. Even though it was hard in the moment, bringing it all to the Rescue Mission and thinking about how many people would benefit from our stuff was overwhelming. We know that countless families will be using what we were not able to use. And that is great.

We still have a ton more minimizing to do with the rest of the boxes in the storage unit, but at least we made some major headway today. My guess is that most of it will be donated or thrown out, because– as Jesus reminds us– our life’s work does not lie in the abundance of possessions. 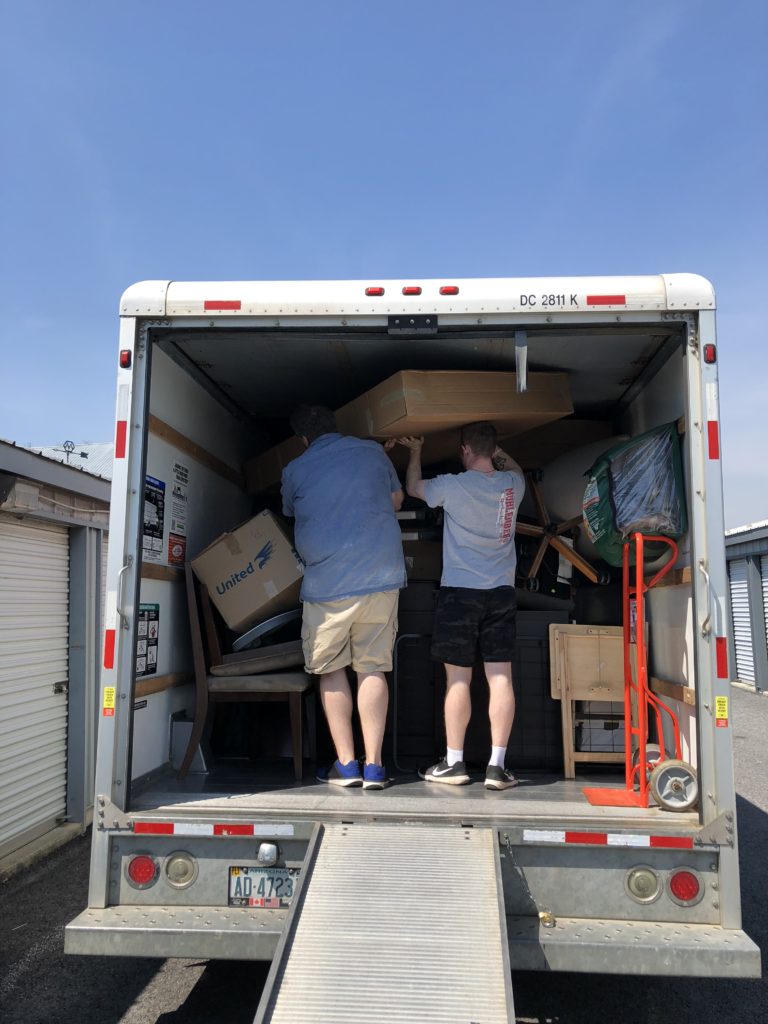