Minimalism in the Movies: The Bling Ring 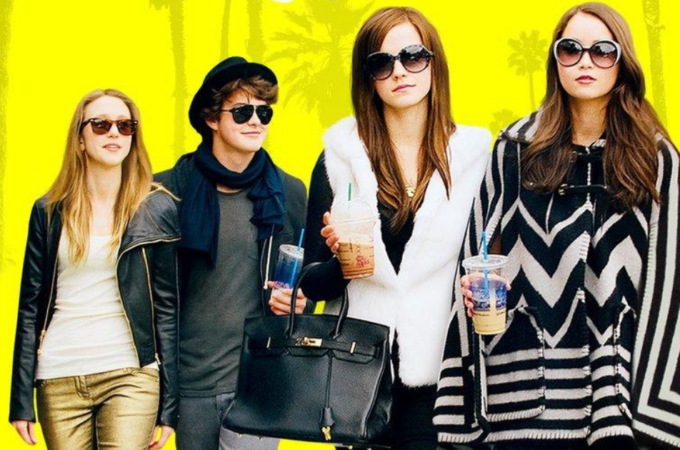 If there is a movie out there that shows the consequences of putting celebrity, wealth, and material possessions above all else, it’s Sofia Coppola’s The Bling Ring.

Based on Nancy Jo Sales’ article in Vanity Fair, “The Subjects Wore Louboutins,” The Bling Ring attempts to tell the real-life story of the teenagers who were behind the Hollywood Hills Burglaries. Obsessed with the fancy clothes, accessories, and other things that their celebrity idols owned, they entered the celebrities’ homes (hitting some of the homes multiple times) taking what they wanted so that they could emulate the rich and famous.

Meanwhile, Prugo said that he and his accomplices never discussed “why” [they burglarized the celebrities’ homes]. “We just did it. I know it sounds dumb, but Rachel just wanted the clothes. She wanted to look pretty.”

The Lifestyle Trumps All

In the movie, it’s clear that it’s not just wanting fancy stuff that drives the teenagers to steal– it’s the whole lifestyle that the stuff symbolizes. They want to be exactly like the celebrities they see in the media, and they believe having these things will help them to live just like them.

Marc explains this in a scene when he’s being interviewed:

Interviewer: Why do you think Rebecca was so obsessed with these women and their clothes– enough to steal?

Not only does Marc acknowledge that the teenagers were obsessed with the rich celebrity lifestyle and wanted to attain it– he also voices the assumption that everyone else wants that lifestyle, too.

In the movie, between robberies, we see the group of friends living the life they see the celebrities living: clubbing, partying, posing with handfuls of cash, and looking glamorous in their (stolen) designer clothes.

It isn’t long before The Bling Ring’s burglaries catch up with them. Security camera footage from multiple celebrities’ homes shows that it’s the same group of teenagers entering and stealing from each home. The police finally identify the teenagers, and arrests and charges are made.

Ironically, a media frenzy begins and the Bling Ring members gain notoriety and a celebrity all their own– in many ways, they achieve what most of them (except maybe Marc/Nick) had been chasing all along:

[Marc talks about his insecurities about his looks and self-confidence]

Interviewer: And now you’re a star.

Marc: On my Facebook page recently, I had over 800 friend requests. I accepted them all, I mean, I didn’t even look at them. And then I noticed that someone had created a fan page for me.

Marc: It’s just kind of awkward that so many people are loving me for something that’s so looked down on in society. If it had been, you know, something that were to benefit the community or something like that, I’d love it. But it’s kind of showing America has this sick fascination with a Bonnie and Clyde kind of thing.

The “sick fascination” Marc describes is not only about robbers who become famous for their robberies. It’s about the burglars gaining fame because they stop at nothing to gain the money and material possessions they believe they deserve– and Americans want those riches and live vicariously through them.

Learning Their Lesson– Or Not

When the teenagers are arrested, it’s clear that most of them don’t quite understand the seriousness of their actions. After getting arrested, Rebecca (actual quote from Rachel Lee) participates in this dialogue exchange:

Rebecca: Did you speak to any of the victims?

Detective: I’ve spoken to all the victims.

And when Nicki is interviewed by the press outside of the courtroom, she says:

I’m a firm believer in Karma, and I think this situation was attracted into my life because it was supposed to be a huge learning lesson for me to grow and expand as a spiritual human being. I see myself being like an Angelina Jolie, but even stronger, pushing even harder for the universe and for peace and for the health of our planet. God didn’t give me these talents and looks to just sit around being a model or being famous. I want to lead a huge charity organization. I want to lead a country, for all I know.

Even while dealing with investigations and litigation, it’s obvious that these young women are still celebrity and wealthy lifestyle obsessed, boarding on having illusions of grandeur. (Side note: You can watch a video clip of Alexis in her reality show Pretty Wild here. It shows her reaction to the Vanity Fair article the movie is based on, and you can clearly see all of this obsession illustrated in her behavior.)

In the movie, and in real life, most of the Bling Ring teenagers ended up serving time in jail or prison. As Marc, dressed in an orange uniform, goes to serve his time, he is the only Bling Ring member in the film who seems genuinely contrite.

The movie revisits Nicki after her time in jail. She is interviewed on TV about being in the same cell block as Lindsay Lohan, whom she stole from. She ends her interview (and the movie) with this gem as she looks directly into the camera:

Nicki: You can follow everything about me and my journey at nickimooreforever dot com.”

“Life that Really is Life”

What’s even more fascinating about The Bling Ring is that most of them came from families that were well-to-do, or at least comfortable financially and material-wise. Rather than being content with what they already had, they chose to take what wasn’t theirs and chase after the rich celebrity lifestyle our media and consumer society idolizes.

But this behavior is contrary to what God wants for us.

As for those who in the present age are rich, command them not to be haughty, or to set their hopes on the uncertainty of riches, but rather on God who richly provides us with everything for our enjoyment. They are to do good, to be rich in good works, generous, and ready to share, thus storing up for themselves the treasure of a good foundation for the future, so that they may take hold of the life that really is life.

Those of us who are not living paycheck to paycheck are considered rich by global standards. And as people who are rich, the Biblical message is clear: our focus should not be on accumulating more.

We are not supposed to spend our lives chasing the wealthy lifestyle glamorized on our TVs and websites/magazines. Instead, God is inviting us to be generous when we have more than we need and focus on serving God and others– the life that really is life.

How is God calling you to stop chasing money and/or material possessions and focus on living the “life that is really life?”

About Becca Ehrlich
Website
Becca Ehrlich, AKA The Christian Minimalist, is striving to be a Christian minimalist in a consumer society. She currently lives in New York City with her husband Will. You can read more about her story and how her blog came to exist by clicking the website link above.

The Sound of Silence   Lies We Believe