Taking out the Trash 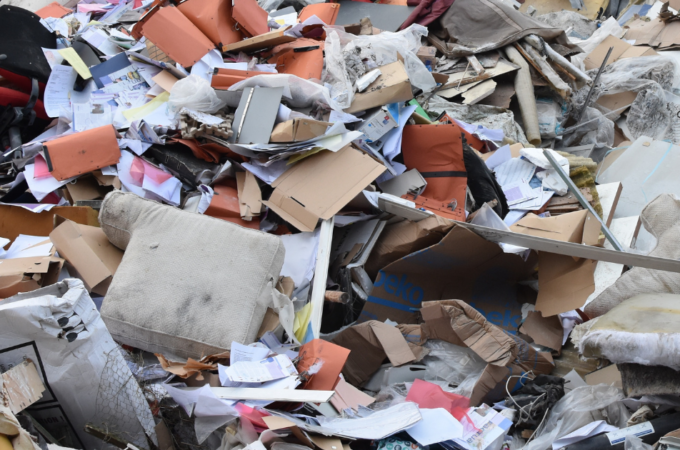 In an episode of the TV show The Good Place titled “Best Self” (Season Two, Episode 9), the immortal being Michael is named an “honorary human” by his human friends and given a “Human Starter Kit” as a gift. He is thrilled.

“Car keys! So I can lose them and say ‘has anyone seen my car keys?’” Michael says, delighted. “Band-aids for your stupid fragile bodies. A stress ball with a dumb corporate logo. I can’t wait to keep finding this and almost throwing it away, and then think ‘No, I’ll use it.’ A Dr. Oz diet book because you’re all such suckers. This is all garbage that I have no real use for.” “That’s right. Welcome to being a human, buddy,” Eleanor says as she toasts Michael. (You can watch the full clip of this scene here.)

As funny as it is seeing Michael’s “human starter kit,” it’s also a bit sobering. This kit is supposed to illustrate how we as humans deal with our material stuff.

And it’s a reality check.

Michael acknowledges that he will probably keep this stuff around just in case he might need it one day and “use it.” Yet, he also says: “This is all such garbage that I have no real use for.” Michael is aware that this stuff is just garbage– but he will hold onto it, because holding onto garbage is what it means to be a human in our world.

If that’s not a depressing thought, I don’t know what is.

“Everything Else is Worthless”

A big part of being human in our society really IS accumulating stuff and holding onto it for a “just in case” moment that usually never comes. That scene from The Good Place is funny specifically because we see ourselves– and our sinful nature– reflected in it. We keep getting more and more stuff, but it doesn’t add value to our lives. In fact, we know we should get rid of it because, deep down, we know it detracts from our lives. But we hold onto all this stuff, thinking that it will serve us in the future. But that imagined future never arrives.

The stuff we accumulate is actually garbage, in every sense of the word. We are surrounded by our waste: the waste of our God-given time, money, and resources. And this waste quickly starts to build up and smell– stinking up the rest of our lives.

This garbage can even keep us from a full relationship with Jesus. Paul writes in Philippians 3:7-8:

“Yes, everything else is worthless when compared with the infinite value of knowing Christ Jesus my Lord. For his sake I have discarded everything else, counting it all as garbage, so that I could gain Christ and become one with him.”

Paul considers societal expectations and everything else around him worthless. He discards the garbage in his life, so that he can have a fully realized relationship with Jesus Christ.

Basically, Paul is a Christian minimalist. Having recognized that a relationship with Jesus is what’s most important, he got rid of all the worthless garbage that was keeping him from God. He prioritized Jesus above everything else– even above what society expected of him.

Taking out the Trash

Paul is a good Biblical example of how God is calling us to live. Jesus invites us into a relationship with him, and in order to have that relationship live up to its full potential, we are called to get rid of the garbage in our lives.

Taking out the trash– both metaphorical and literal trash– is not easy. As Michael showed us in The Good Place, we have an innate drive to keep stuff around, even when we know it isn’t serving us well. We keep material possessions and bad habits and toxic people because we think we should, or because we’re scared of what will happen if we get rid of them.

But through Paul’s words, we hear Jesus’ encouragement and calling:  we are invited into a Christian spiritual life that is so much more than holding on to garbage. We are called to get rid of those things that are stinking up our lives and filling our lives with worthlessness. With God’s help, we can take out the trash in our lives and truly live the life God is calling us to live.

How is God calling YOU to take out the trash in your own life?