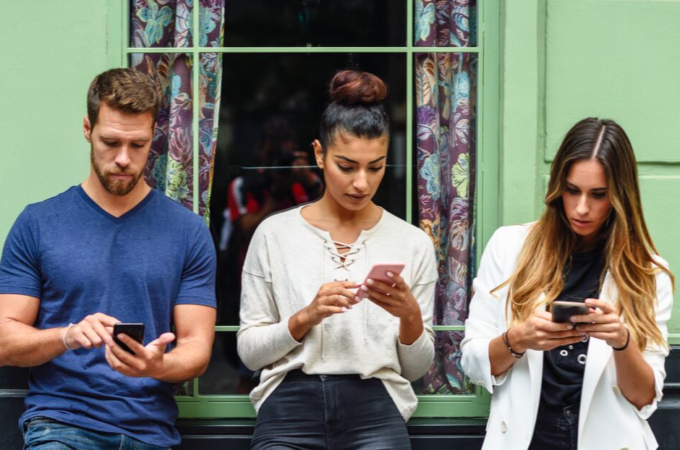 There is no doubt that the use of smart phones, the internet, and social media have helped us connect with one another and made information accessible to more people than ever before. Thanks to our phones and social media, we can see what our friends from across the country or around the world are up to, and comment on it, in a matter of seconds.

But as much as we appreciate the benefits, we are also aware of the detriments. We have all seen internet comments or a social media thread get out of hand— but the problems go much deeper than that.

We are becoming addicted to using technology. Tech addiction is a real thing, and the games, websites, streaming and social media platforms we use are actually made to encourage binging and addiction– check out Adam Alter’s book Irresistible: The Rise of Addictive Technology and the Business of Keeping us Hooked. It’s a harrowing read.

A U.S. photographer, Eric Pickersgill, has produced a series of photographs that visually represent our technology addiction.  In the series Removed, Pickersgill removes the phones and tablets from the subjects’ hands before snapping the shot. We see people in many different places and contexts, all staring at their empty hands where their technological devices used to be. (You can read more about Eric Pickersgill’s explanation of his work on Removed here.)

Some of his subjects are alone– and some are taking a photo or waiting for a bus or in line– but the majority of the photos show people in community. Physically, they are with others, but mentally they are somewhere else– lost in the shiny world of the internet, games, and social media, immediately accessible on their phones. With the devices taken away, the photos become a testament to how much we are missing out on when we constantly retreat into our devices.

Just in case you think this is only a problem in the United States, Pickersgill has a second installment of the series taken in South East Asia, and is working on a third installment in India. Across the globe, we are constantly engrossed in our devices and missing out on life.

The Importance of Community

The fact that most of Pickersgill’s photographs in the Removed series show people in community is no accident. It’s ironic that technologies made to connect people are now, due to our technology addictions, eroding our ability to connect with people well.

A particularly powerful example of this is the photo that shows a bride and groom, leaning against their car with a “Just Married” sign on it.

Still wearing their wedding finery, having just tied the knot, we see the couple staring at their empty hands where their phones had been seconds before. Rather than interacting with one another as newly minted spouses, they are instead staring into their own personal technological abyss.

Children, adults, teenagers– all are shown in the series, and all that are photographed in community are lost in their own technological worlds rather than conversing with those around them.

Because technology has infiltrated a good chunk of our lives, we are losing the ability to speak and listen to one another in person. We are missing out on personal and emotional connections to one another that can only be done face-to-face.

But God created us to be in community. In fact, Jesus is there when we are together. Jesus reminds us:

For where two or three are gathered in my name, I am there among them. (Matthew 18:20)

When we are truly present and connect with one another in person, we experience Jesus. We see Jesus in others, and we are able to be Jesus to others. When our minds (and hands) are somewhere else, we miss out on experiencing God in a powerful way through others.

How very good and pleasant it is when God’s people live together in unity!… For there the Lord ordained his blessing, life forevermore. (Psalm 133: 1, 3b)

In face-to face conversation and contact, we receive God’s blessings for us. We can miss out on these particular blessings within community when we are constantly distracted by our hand-held technology.

When we are not able to be in person with one another, technology is a good temporary substitute. But we are ultimately made by God for in-person human interaction. In face-to-face community, we are able to truly live out God’s blessings and be blessings for one another.

How is God inviting you to focus on what matters most by spending more time in intentional community, focused on those in front of you rather than your technological devices?

Enough   Why You Need a Christian Minimalism Accountability Partner