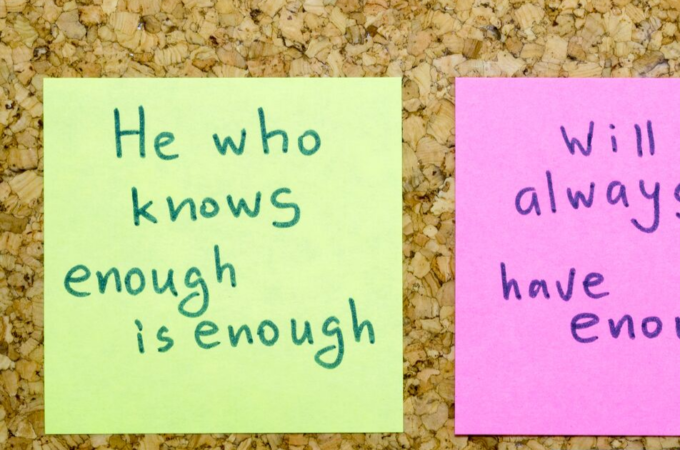 A few years ago, there was a TV commercial for AT&T that made the rounds. It featured an executive in a suit sitting on the floor in a circle with a bunch of young kids. He asks the kids, “Who thinks more is better than less?” All of the kids raise their hands.

“OK, why?” he asks them. A little girl talks about how upset she gets when her parents say she can’t have more of something when she wants more. “We want more, we want more. Like, we really like it. We want more” she says.

A voice-over narrator then takes over. “It’s not complicated. More is better.”

And then one day, when I discovered minimalism, I realized why—more is not always better. In fact, more can actually be really detrimental to us, our lives, and those around us. It perpetuates constant dissatisfaction and unhappiness. It can also mean living beyond our means and using the resources God gives us (money, time, energy, talents, environment) in ways that harm ourselves and others.

But having too little can be just as harmful. Maslow’s Hierarchy of Needs reminds us that if we have too little– and our basic needs aren’t met– we are typically unable to have our emotional, social, self-esteem, and self-actualization needs met.

Having too little means that our lives become a constant drive to sustain ourselves. We are in a state of perpetual seeking and need. The focus becomes survival, and we are unable to thrive.

Many people assume that being a minimalist means less is always better. And since most of us have too much right now, less is better at the beginning. But eventually, having too little is just as detrimental as having too much.

The answer, of course, is that the goal is to have enough. Goldilocks was onto something. Finding our “just right” is key.

Minimalism is about enough. Too much– we are overwhelmed. Too little– we are frustrated and unfulfilled.

Finding that “happy middle” is a personal journey. As Patrick Rhone writes in his book enough:

Enough is a very personal metric. Like our center of gravity, each of us must find what it enough by swaying from less to more until a comfortable medium is found.”

Enough is going to look different for each of us. Your enough will be different than your friend’s enough. Minimalism is the process of experimentation to figure out our own personal happy medium.

Ultimately, we can trust that God provides enough. As Paul writes:

And God is able to provide you with every blessing in abundance, so that by always having enough of everything, you may share abundantly in every good work. (2 Corinthians 9:8)

What needs changing– in those of us who have too much– is the ability to be satisfied in having enough. We can be satisfied because we know that God provides. Christian minimalists live a life of enough.

May we be satisfied with enough for ourselves, and strive to share so that others may also have enough.

How is God calling YOU to live a life of enough?